It’s time for a new era of Amazing Spider-Man as Nick Spencer (Superior Foes of Spider-Man, Morning Glories, The Fix) and Ryan Ottley (Invincible) step up as the new creative team on Marvel’s flagship title. Following on from Dan Slott’s eventful run, Spider-Man has well and truly been through the ringer. Having lost one of his closest friends to a Carnage-possessed Green Goblin, life should be cutting Peter Parker some slack. But sadly, that’s not the case. Not only does Doctor Octopus’ academic activity (when they switched bodies!) cost Spider-Man his job and reputation as Peter Parker, but Wilson Fisk – who is currently the mayor of New York – decides to give him his own personal endorsement, which tanks his standing with his fellow heroes. But there are some silver linings as Peter finally reunites with Mary Jane and has an opportunity to regain his standing in the academic community. But the latter ends up creating a type of enemy that Peter has never had to face before… 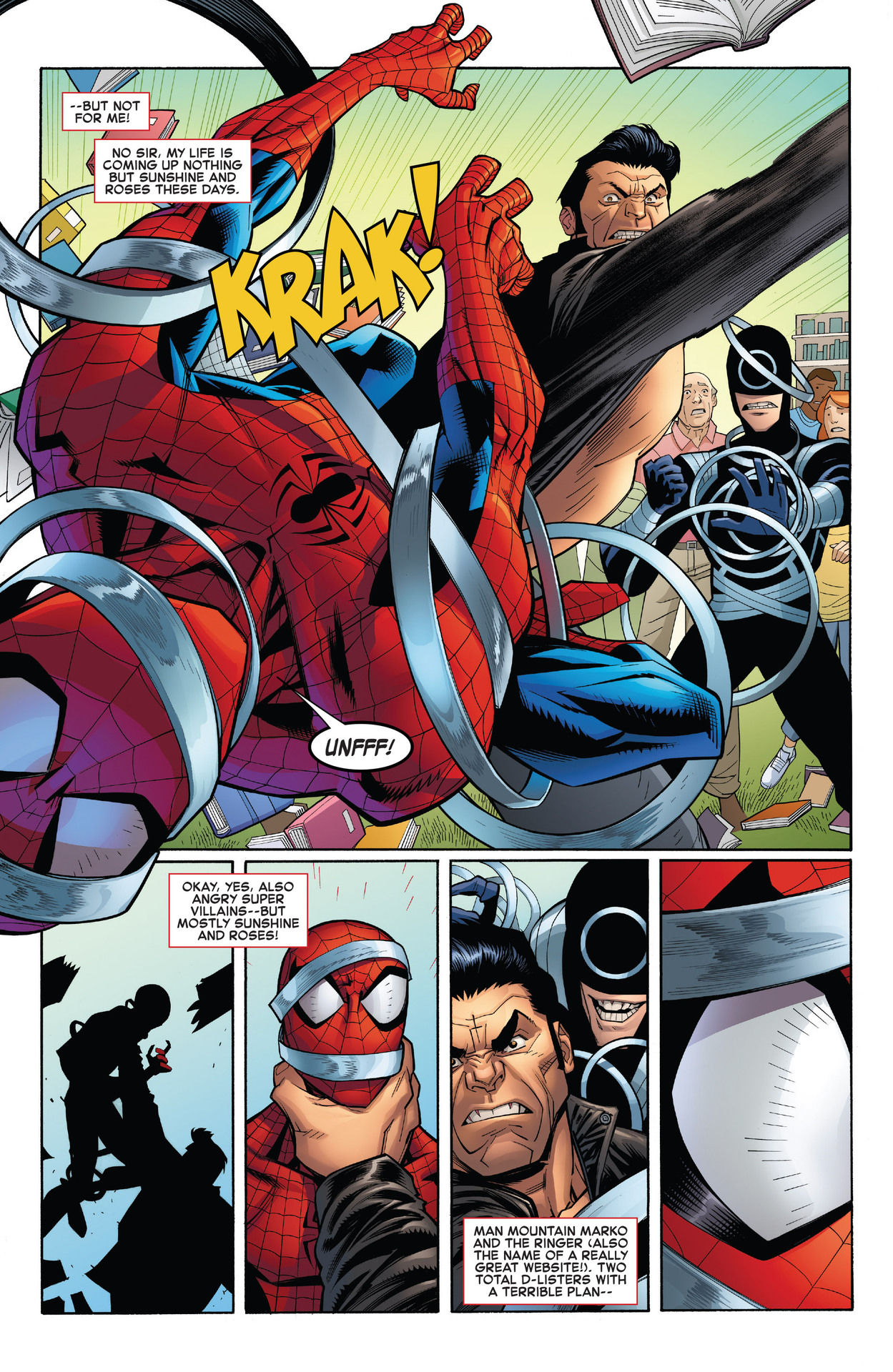 Immediately, this comic will come as a breath of fresh air for Spider-Man fans, as the series returns to the theme of responsibility, for which it is best known. As epic as the previous run may have been, it has created problems that don’t necessarily mesh with the Web-Head’s character. In this new arc, Peter has to face the music for taking advantage of the opportunities Doctor Octopus created for him when he’d stolen his body. Not only that, but he finally confronts Mary Jane and admits that his life is incomplete without her in one of the opening volume’s best moments. The erasure of their marriage in the highly controversial One More Day storyline has remained a sore point with fans for over ten years now and this new story is bound to win over those who felt jaded by those events. Nick Spencer is aware of these problems and – rather than sweep them under the rug – he encounters them face on and manages to weave them into Peter’s character arc. It’s even used for the first main villain encounter of the story as an accident in The Lizard’s lab leads to Spider-Man and Peter Parker being split into two separate beings – leaving Peter with none of his powers or intelligence and Spider-Man with no sense of responsibility or humility. 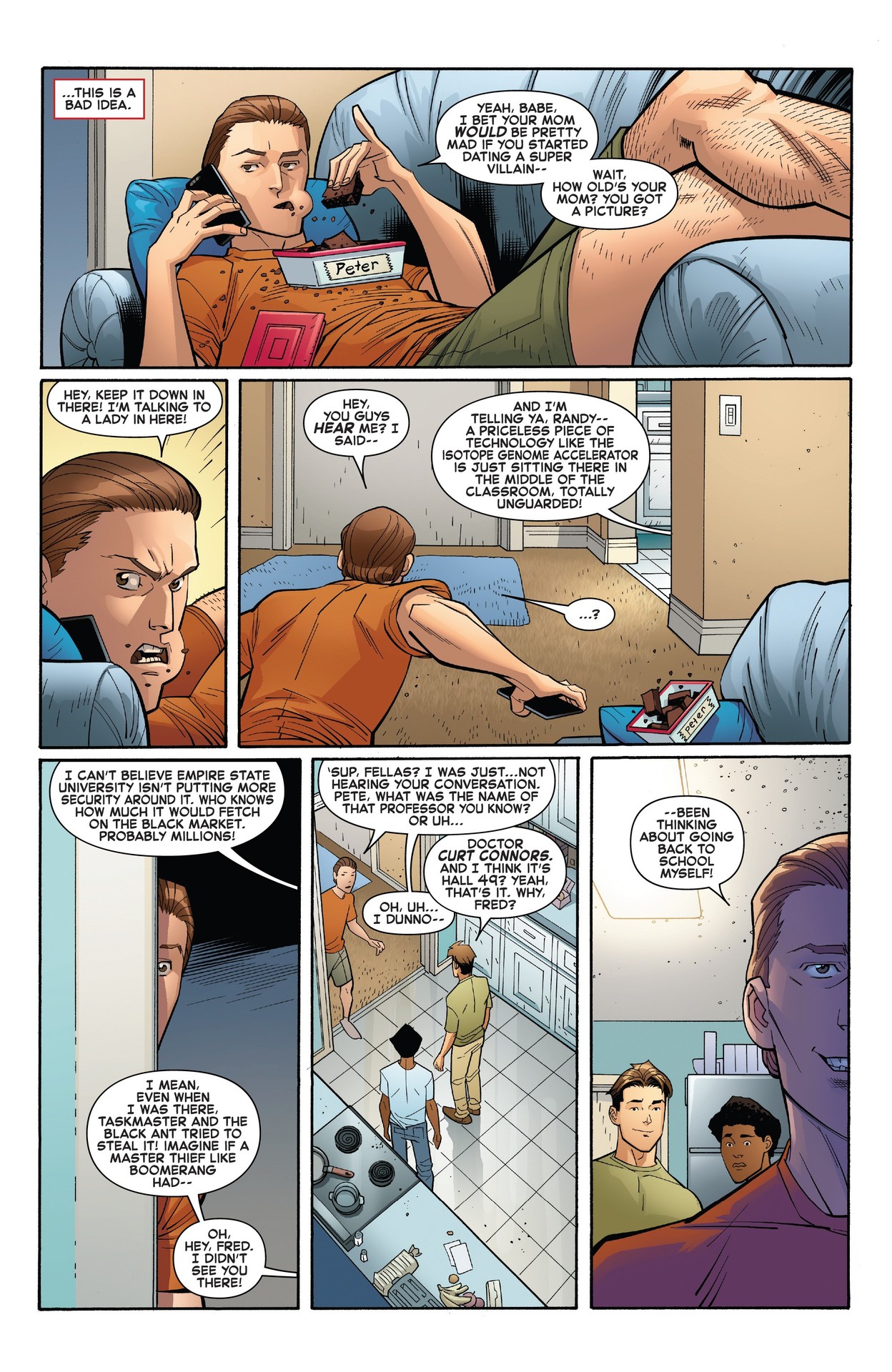 Beyond his approach with these factors, Spencer brings fun and wit to Spidey which surpasses many recent approaches to this facet of his character. The witty banter is right on point and this volume is littered with great moments (the highlight being the foiling of perennial D-List villains Man Mountain Marko and The Ringer in their attempt to loot a first edition book fair). Anyone who has read Spencer’s The Superior Foes of Spider-Man series knows humour is one his major strong points. Fans of that series will also be delighted to see Boomerang playing an active part in this series as Peter and Randy Robertson’s new roommate who quickly grates on the two. 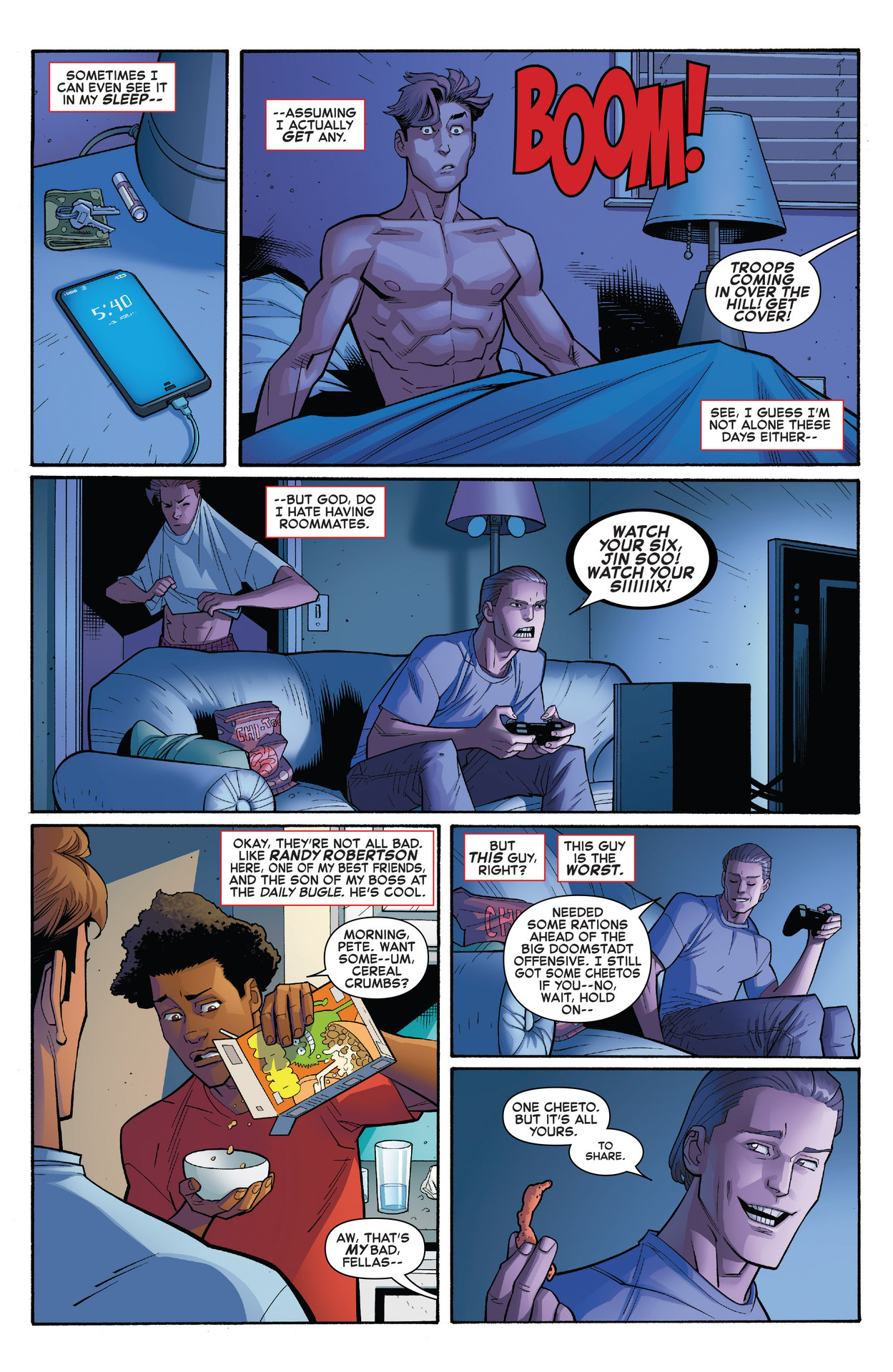 This is Ryan Ottley’s first ongoing work for Marvel and it’s a match made in heaven. Anyone who has read his Invincible series knows the energy he brings to superhero art and this is no exception. There is no emotional beat he doesn’t excel at and his cliffhangers between chapters will stay with you for a long time (Peter’s reunion with MJ and a responsibility-free Spider-Man taking a reprogrammed Tri-Sentinel for a joyride are some of the most memorable Marvel images in recent memory).

Spencer and Ottley are a perfect fit for Amazing Spider-Man, and this is an extremely promising opening chapter in what should be a highly memorable run. All Spider-Man fans owe it to themselves to check this series out.

Turnaround's in house geek since 2011. Ardent comic reader and aspiring comic writer. Find me @leosutherland for mumblings about comics, video games, cartoons and other stuff. View all posts by Leo

As a member of Bookshop.org’s affiliate program, Turnaround may earn a small commission of any Bookshop.org purchases made via this site.

Get updates on new releases delivered to your inbox & request advance copies for review.